The End of Mental Hospital Regime: In the Age of Dementia 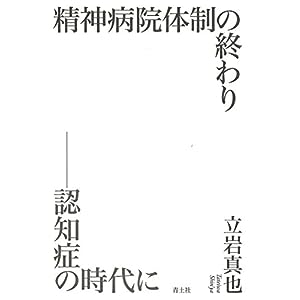 (From "BOOK" Database)
What makes this "evil" keep existing? Through government policies and activities by people involved in psychiatric treatment during the past half a century, concerning intern of mental patients, community transition, taking in of people with dementia and euthanasia, and transinstitutionalization, the author examines considerations of this society to disclose the structure that prevents mental hospitals from being closed. Moreover, the author makes suggestion to make the structure ended.

■■■Supplementary Chapter 1 What I Have Stated etc.

■■２ There Are Some Cases in which Hospitals and Medical Staff No Longer Have Anthing to Contribute （2013/11/23）
■To Rebel Is Justified: Toward the Modern History of Psychiatry
■About the "History"
■What We Call "Transinstitutionalization"
■We Need People who Decide to Stand by the Invloved Person
■Again, How to Succeed

■１ What We Need to Understand in Advance
■２ Remedy Comes First
■３ Defense Existed under Mental Hospitalization
■４ It Has Been Said Much Later and It Receded into the Background without Being Noticed
■５ Family / Family Association Supported Mental Hospitals
■６ They Made the Situation of Mental Hospitals Maintained and Enlarged while Affirming Dehospitalization
■７ Aspects of Demand-side / Supply-side concerning Mental Hospitals Were Largely Understood
■８ However, the Situation Was not Changed
■９ Saying that Mental Hospitals Are Better than Nursing Homes
■10 Transinstitutionalization / Institutions for Supporting Hospital Discharge / Health Care Facilities for the Elderly...
■11 Still, It Is Possible to Change

Everyone thinks that present conditions of mental health and mental hospitals are not good. But when dissatisfaction is voiced, it is always countered with a question: well, then, what can we do about it? It also makes sense. In 2013, my book entitled To Rebel Is Justified: Toward the Modern History of Psychiatry was published, and the movements I described there could not solve the problems posed by the structures addressed by the book ? just as other movements and people who engaged in them. The book tries to find what can be done about the circumstance.

Chapter 1 describes one aspect of what the current conditions are (2014 to 2015), and in Section 5 (page 31), I tries to summarize the essential points, which can be drawn from there. The current state of affairs ? a rather comic one ? is described in this chapter. Those who would like to quickly get to the point and see what should be done should first and foremost read Section 5 of the chapter.

Chapter 2 is about Kyoto Juzenkai Hospital, an enormous hospital, which had been subjected to very strong critique and accusations for about 20 years, but all these efforts did not succeed in changing in any substantial way that hospital or other hospitals of this country operate. I try to examine reasons why no changes were made and what alternative means are available to us to make changes. Sections 4 to 5 explain, based on the scandals around the hospital and the ways they were addressed, what should be done or should have been done, showing that among the three and two points made in Section 5 of Chapter 1, four of them are undoubtedly true.

In the beginning of Chapter 3, I first state in the briefest way possible my answer to those who want to get to the point, describe the problems of community support listed fifth, why the community (transition) support goes from bad to worse? which, I would think, is not yet widely known ? and in Section 4 (page 140), show the alternative measures.

In Chapter 4, I show that people with dementia are expected to be customers of the mental hospitals on the one hand and do, in fact, become such customers, while they, on the other hand, are deemed worldwide as candidates for euthanasia and dignified death. On that basis, in Section 2 (page 174), I discuss how we can help those with dementia, and in Section 3 (page 146), I briefly summarize the points made in the book. I have established a point that troublesome matters are not going to just go away and we shouldn't try to get rid of them all in the first place. Then, I describe the little frameworks that can and should be conducted.

Impatient readers are advised to head straight to this "answers" section. But if you want to know why things that are listed there, which, from my point of view, have to be, as a matter of course, ensured in our society, are, in fact, not ensured, you will need to read what I write in the preceding parts of the book. There even those well informed in these matters will find information that is not well known or is not well remembered. Also, to get an understanding of why I believe that my answer is right you will sometimes need to read some quite lengthy accounts. That is why I would prefer that those of you who have time try and read the whole book in the chapter order.

The above four chapters comprise the main part of the book, and the second part carries three supplementary chapters.

Supplementary Chapter 1 carries reprintings of a paper I was asked to write and a lecture I was asked to deliver. I think that you can well start with reading these two. The second part of the chapter, that is, my lecture (Tateiwa [2013b]) held at the Mental Health Forum, was delivered on the date when the book To Rebel Is Justified: Toward the Modern History of Psychiatry was published. Or pehaps I should say that I particularly asked the publisher to publish the book by that date. This book is an account of what I have researched on and wrote about after that day, and, in that sense, it would have been better to publish the book when I delivered a lecture about a year later at the plenary session of the Japanese Hospital and Community Psychiatry Association (Tateiwa [2014d]). But the record of this lecture does not exist. Also, as that lecture used some of the materials used for the serial articles, which this book is based on, there is naturally some content overlapping. On the other hand, the paper and the lecture, which both precede it, although they do not cover the points made in this book, still can convey the basic stance it is written upon. Medical workers are busy, and what I tell them is that if they are that busy, they simply should not work. The book is written in a somewhat simplified manner, but that may make you read it easier.

Supplementary Chapter 2 describes a number of events and causes that are connected to the fact that since the end of the war, the number of mental hospitals (and the number of hospital beds) has been steadily increasing with no decreases at all. This is a part of the whole we need to grasp, and I, for one, cannot view it as a whole. This is why I consider this part a mere note. But although it is just that ? a note ? I believe that there are some points there that are worth understanding.

Supplementary Chapter 3 carries reprintings of a number of book reviews that I had been writing for quite some time without changes. Many of these were published in the "Guide to Books on Medical Care and Society", a series that ran 101 times from 2001 to 2010 in the Kango Kyoiku (Medical Education) published by Igaku-Shoin. The reviews cover books on dementia and mental disorders, as well as on medical sociology and DSM which have been published over the course of these 15 years, as well as some books which were published before that, and these books are also connected to the content of the first part of the book. When the reviews are brought together, the reviews add up to quite an amount. Yet I feel that those interested in the issues raised there will find them informative, and even those well acquainted with the subjects will be able to enjoy them. Here is also a text I wrote about Mikio Sato's Jiheisho Saiban: Ressar Pandabo Otokono Tsumi to Batsu (The Autism Court Case: Crime and Punishment of the Man in Red Panda Hat), and the one about filmmaker Kazuhiro Soda's Seishin (Mental). The conclusion is based on the supplementing notes to my previous book To Rebel Is Justified: Toward the Modern History of Psychiatry, which were written after the book was published.

Except for Supplementary Chapter 1 and 3 (excluding the introduction of my previous book), this book is based on the 14 articles, which appeared in serial form in the Gendai Shiso (Contemporary Thoughts) journal. Chapter 1 and Supplementary Chapter 2 were rewritten the most, not only in content but also in the structure. I would like to express here my gratitude to Mr. Kazuki Kurihara of the Seidosha (for his office) concerning my series of articles in the Gendai Shiso as well as this book.