This September Colin Barnes and Alison Sheldon will come to Japan and a short-term intensive course (Englishe/Korean) will be held at Ritsumeikan University. They will also speak at the General Meeting of the Japan Disability Studies Association to be held at the Komaba Campus of Tokyo University. The textbook that will be used is Exploring Disability (2nd Edition) (Barnes and Mercer 2010, first edition Barnes, Shakespeare and Mercer 1999, Japanese translation 2004), and in this book there is no mention of activism on the part of people with disabilities or "disability studies" in Japan. This is not at all surprising, and is the result of our failure to publish articles in [foreign] journals and communicate by other means what is occurring in Japan [to the rest of the world].

We have thus decided to write a few papers on the disabled movement and statements/writings/research related to disability in Japan. We have already written a book entitled Ars Vivendi: Sociology of Diabled People Who Left Home and Institution(Asaka et al. eds.［1990］, revised and expanded edition 1995). This text has been translated into Korean so it is now possible for people who understand that language to read it in its entirety. At the time this book was written the term "shogaigaku"("disability studies") did not exist, but it has since come to be referred to as a text published during the initial period of this field of study in Japan. One of the papers I wrote for this book, "Fast/slow - the growth and development of the independent living movement" (Tateiwa 1990, 1995), focused on the history of the disabled movement and government policy. This paper was quite detailed and contained much that would be of interest only to people in Japan. In putting together this introduction to the disabled movement in Japan I have cut a great deal of this detailed content and in some cases added explanations where I thought necessary. 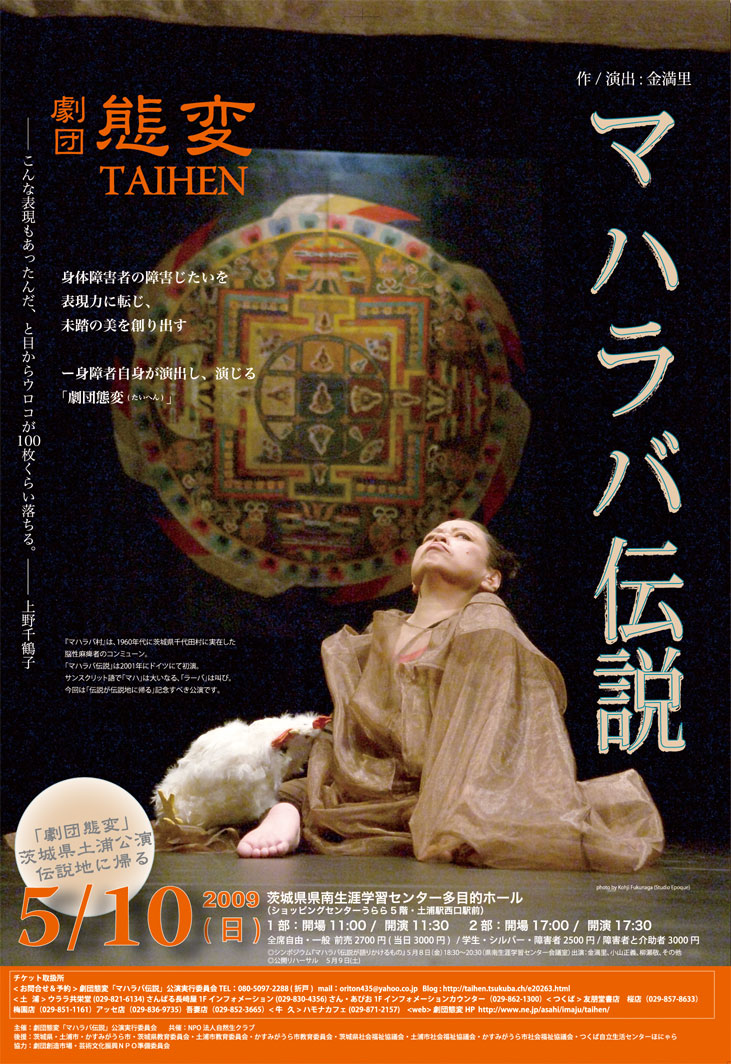 After this commune broke up, members that ended up living in Kanagawa Prefecture (located not far from Tokyo) participated in the activities of Kanagawa Prefecture Aoi Shiba no Kai. This was a very small organization, but in 1970 it engaged in criticism of efforts being made by local organizations and the association for parents of children with disabilities to secure a full pardon for a mother who had killed her two year old child who had suffered from cerebral palsy. The organization's activities were reported in newspapers at the time, and it was introduced in a March 1971 broadcast of "Gendai no Eizou" ("Hitotsu no CP sha shudan (An organization of people with CP)" ) on NHK television.
After this incident there were calls for greater support and assistance for parents, criticism of the inadequateness of facilities, and growing sympathy for people with disabled children. This was similar to the public sentiment that had led to the expansion of facilities for people with disabilities in the 1960s. Members of the Aoi Shiba no Kai, however, drew attention to the problematic nature of a state of affairs in which the existence of people with disabilities itself was not affirmed and of statements such as "they would be better off dead" which could not be reconciled with the perspective of someone living with a disability. They also pointed out that their existence itself was not truly accepted by these parents.

The 1970s also saw the start of a movement criticizing the management of the facility for people with disabilities in Tokyo. Residents lived in just two large rooms, one for men and one for women, with only folding partitions to separate their personal areas, and were subject to a fixed wake up time of six in the morning (lights came on at five fifteen) and a mandatory "lights out" at nine in the evening. There was also a fixed time for going to the toilet, and, in order to avoid having to assist residents go to the toilet at other times, in the morning each individual was given a bedpan. Visits were allowed once per month. Excursions/staying overnight outside of the facility required permission, and the number of times permission would be granted was limited. Possessions, including food and drink, were regulated, and at the end of the day residents were made to change into pajamas. They were not allowed to grow their hair long because it made washing difficult. Female residents were bathed by male staff. When the facility was opened, one of the conditions of entrance was the granting of permission for the resident's body to be dissected if they died while living there. In the facility there were painting, origami, and exercise programs, and residents were taken on walks three times a week. Activism in opposition to this kind of lifestyle was carried out by some of the residents and their supporters. The development of this movement was complicated, but it focused on specific improvements to the standard of living inside the facility and was also connected to the movement pushing for residents to leave the facility and live on their own ★02.
This led to the start of a movement that rejected the image of people with disabilities as being in the custody of their families, presented them as individuals with their own interests/assertions distinct from those of their families, and sought to have them live independent of the protection/care of their families. In the latter half of the 1970s this came to be referred to as the "independent living" movement. At that time the American independent living movement was not well known in Japan. Information about this movement in the U.S. was first introduced around 1980 by professionals in the field of rehabilitation. Since that time it has rarely been noted, even within the fields of social welfare studies and rehabilitation studies, that this movement developed independently in Japan at the same as it was emerging in America. Even within the [Japanese] disabled movement the independent living movement is sometimes thought of as having originated in America, but this is not in fact the case. (One of our aims in writing books and papers on this topic has been to correct this misunderstanding. How the history of this movement came to be understood in this way is something I will discuss later).

In 1972 Kazuo Hara, who would later become well known as a documentary filmmaker for such works as The Emperor's Naked Army Marches On (winner of the Caligari Film Award at the 1987 Berlin International Film Festival), made his first film, Sayonara CP, in collaboration with Aoi Shiba no Kai. Hiroshi Yokota (see Yokota [2004] for a collection of his dialogues), flopping through crowded streets on his folded legs, and Kouichi Yokozuka (see Yokozuka [1975], expanded edition [1981], and new edition [2007]), two people who were often stared at, carried cameras themselves and shot footage of the world around them; this was in turn shot by the filmmaker and shown in the documentary. Hara said the following in an interview about the film:

"Around that time the idea that "black is beautiful", a radical way of thinking in which the physical characteristics of black people, which had been discriminated against, were themselves seen as being very beautiful, had begun to emerge in America. I thought that in the same way it should be possible to say that "physical disability itself is beautiful". I therefore decided to pursue the question of what physical disability actually is"★03.

"People without any disability often "show their understanding" by saying things like "people with disabilities are human beings just like us". ...we are completely different. For each of us the most important part of the environment in which we live is our own body. No matter where we go we cannot get away from it"★04.

★01 For information about the production see http://artnpo.exblog.jp/9565257/ (Japanese).
This theatre group is run by a polio sufferer named Manri Kim. His written works include Kim [1996], and Kishida and Kim eds. [1984], revised edition [1995].
★02 A book (Mitsui [2006]) has been published by Kinuko Mitsui (b.1945), a woman who entered a facility, became active in the opposition movement while a resident, and eventually left to live on her own.
★03 http://www.puku-2.com/maneko/tokushu/tokushu8_1.htm (Japanese).
★04 in Takasugi［1972］. cited in Tateiwa ［1998］.
★05 Documents are recorded in Yokozuka ［1975］［1981］［2007］. cf.Sadatoh［2010］.
★06 "Platform for Aoi Shiba Movement(1970) is below.(translation by Osamu Nagese.)
* We identify ourselves as people with Cerebral Palsy (CP). We recognize our position as "an existence which should not exist", in the modern society. We believe that this recognition should be the starting point of our whole movement, and we act on this belief. * We assert ourselves aggressively. When we identify ourselves as people with CP, we have a will to protect ourselves. We believe that a strong self-assertion is the only way to achieve self-protection, and we act on this belief.
* We deny love and justice. We condemn egoism held by love and justice. We believe that mutual understanding, accompanying the human observation which arises from the denial of love and justice, means the true well-being, and we act on this belief.
* We do not choose the way of problem solving. We have learnt from our personal experiences that easy solutions to problems lead to dangerous compromises. We believe that an endless confrontation is the only course of action possible for us, and we act on this belief.
("Ayumi", no. 11. p. 1. 25 October 1970)
The following fifth point was added at a later date.
*We deny able-bodied civilization. We recognize that modern civilization has managed to sustain itself only by excluding us, people with CP. We believe that creation of our own culture through our movement and daily life leads to the condemnation of modern civilization, and we act on this belief.

cf.
◆Hayashi, Reiko & Okuhira, Masako 2001 "The Disability Rights Movement in Japan: past, present and future", Disability & Society 16-6:855-869
◆Kenjiro Sakakibara 2009 ‘Disability Movements and the Economy: A Comparative Sociological Study between Japan and the US’，Disability and Economy: Creating a Society for All, Todai Forum 2009 in UK
http://www2.e.u-tokyo.ac.jp/~read/en/act/forum2009/program.html
http://www2.e.u-tokyo.ac.jp/~read/en/act/forum2009/paper/sakakibara.doc
◆Nagase, Osamu 1995 Difference, Equality and Disabled People: Disability Rights and Disability Culture, Politics of Alternative Development Strategies at the Institute of Social Studies, the Hague, the Netherlands, Master's Thesis (Master of Arts)