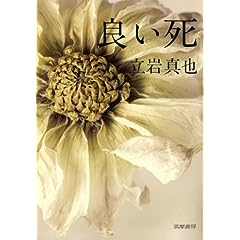 
This is the penetrating criticism on "Dignified Death" by a sociologist who has been persistently seeking the desirable society as he studies near the severely diseased people or patients of incurable illness.

When somebody is living with severe pain, what people around him or her should do is to reduce that pain as much as possible, to assist the patient to live peacefully as much as possible. It should be such a common sense. However, today's society is heading toward the completely opposite direction. The theory of "Dignified Death", which offers the swift death to the patients of "Incurable and Terminal Phase", is spreading. It appeals to kind and humble patients who hate troubling other people, with the sweet-sounding oratory of "Self Decision" or "Natural", or threatening voice of "useless life extension".

Tateiwa is conducting the all-out resistance against the quiet but steady trend to systematize the dignified death. Such "All-out Resistance" tends to be raising one-time opposing catchwords (like "Respect Life"), but in Tateiwa's case, he has been collecting all the possible elements surrounding the issue, and think and consider the issue from every possible angles. Let me introduce an example of such points to show his distinguished considerations.

Dignified Death is said to be based on altruistic idea, in other words, hating to trouble others for us. However, when the dignified death is systematized and the idea of "useless-life" become more easily accepted, the lives of those patients who are suffering severely but still CAN live and WANT TO live, will be denied and more such people will be forced to undesired death. Approving dignified death means surely causing somebody's death, so it is not altruistic at all. So Tateiwa says, "We should ask those who cannot die to live and bear their suffering, in order to save those who will be forced to death although they want to live."

This book is must-read for all people who seriously want to consider wide variety of issues about human being, not only dignified death or terminal care, especially in today's Japan where doomed mood of "no work, no use living" is wide spread.

The book title says "Good Death?", but this book doesn't tell you what is a good death or how people should die in good way. Instead, Tateiwa writes what we all need to keep in mind when we take care of dying people or considering to shorten somebody else's life.

Tateiwa opposes laws to approve mercy killing or dignified death. Some might argue, "Are you denying the right to decide one's own way of dying by oneself?" It's not what Tateiwa is trying to say. He says, dying can be a choice only after "the conditions that you can live if you want to live" become properly available. Unfortunately, such condition is not properly available in today's Japan.

Some people kill themselves, believing they had enough or not wanting to trouble other people. There is no need to deny that choice. Tateiwa says, as he understands such feeling and respects such courage, "You don't have to do that, that shouldn't force you do that," but there should be the way to handle it. I believe there is hope in this narrow passage to dismantle the trend of society heading to force mercy killing and dignified death.

Of course, some may argue that lack of human resource or budget exists as obstacles to realize terminal care. Tateiwa says, the shortage is illusion. The society can spare ample amount of money if they want, and human resources are surplus these days. Surprisingly, the resource to support terminal phase people exists, in plenty.

Still, if you see the present situation of actual care spot, people are suffering with shortage of money and human resources. That means, the whole system of society is something wrong and cannot support elderly people or disabled people. This academic book gives you the great thoughts to think about it. If you bear the author's particular writing style a bit and go on reading carefully, I'm sure you will get something from this book.