The Age of the Okinawa Struggle 1960/70:
Thoughts and Practices that Overcome Segmentation 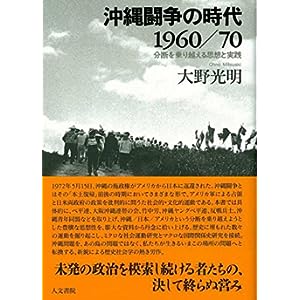 The Never-ending Practices of People who Keep Seeking Undiscovered Politics
On May 15, 1972 the administration of Okinawa was returned to Japan from the U.S. The Okinawa struggle means various social/cultural movements which critically questioned the policies on Okinawa both of the U.S. and Japanese governments around the time of Okinawa's "reversion" to Japanese sovereignty. In this book the author deals with Beheiren (Japan "Peace for Vietnam" Committee), Osaka Okinawa Rentai-no-kai (Osaka-Okinawa Solidarity Association), Ro Takenaka, Okinawa Young Beheiren, antiwar soldiers of the U.S. bases in Okinawa, Okinawa Seinen Doumei (Okinawa Youth Union) etc. and patiently pick up rich thoughts that tried to overcome the division of Okinawa/Japan/U.S. from huge tomes. Then the author connects micro research on social movements with macro research on the history of international relations. This book has excellence as historical sociology in that the author transforms the "Okinawa problem" from the problem of the island itself to the problem of the place where we live now.

"The Okinawa struggle was defeated in the sense that it was not able to prevent/change Okinawa's reversion to Japanese sovereignty with bases. And I already know about its defeat. However, it is impossible to discuss it by subordinating the past from the opinion and framework of people who live today. It does not mean that we should unconditionally praise and protect the past movements. It is necessary to describe inherently the act which faces the defeat desperately, craft sentences even with some resistance, accompanying its process. Although it is not clear to what extent I have achieved it, this book tries to describe inherently in this sense." (From Introductory Chapter)

Chapter ５ Military Violence that Crosses and Movements that Cross the Border: Beheiren Movement and Antiwar Soldiers in Okinawa
１ Not the "Removal" of the Bases But the "Dissolution" of the Army
２ Global Antiwar/Antimilitary Movements and Okinawa
２‐１ Protest Movements of U.S. Soldiers
２‐２ Intervention of Global Antiwar/Antimilitary Movements into Okinawa
３ Beheiren in Okinawa
３‐１ Opposing the Vietnam War in Okinawa
３‐２ People who Have Nowhere to Go and Beheiren as a Style
３‐３ "Internationalism" of Okinawa Young Beheiren
４ Resonance of Anger toward the Military Regime
４‐１ Start of Cooperation: The Network of Beheiren
４‐２ Deepening Joint Struggles and Understanding: Crossing Violence and Resonance of Anger
５ Border Transgression and Conflicts: Reproduction of the Borderline
６ Vibration and Politics

Chapter ６ Conflicts between the Okinawa Struggle and the Nation State: A Case Study on Okinawa Seinen Doumei