Histories of Regimes: Articulation for Times 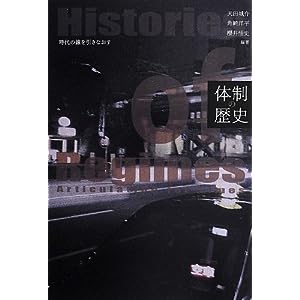 （From "BOOK" Database）
This book tries to reexamine histories of major "regimes" critically by taking viewpoints of histories of minor "regimes". For example, this book does not deal with "welfare state regime", "security regime", and "global economy regime" directly nor does it conduct internal criticisms toward them. What this book intends is to draw a new dividing line and auxiliary line on existing histories of "regimes" by applying a viewpoint of another "regime" based on people, problems or ways of life that major regimes have not paid attention to.

◆Chapter １ (AMADA Josuke)
Policy on Hansen's Disease under the Process of Making a Welfare State during Wartime: Organization of Beggars' Labor/Various Labors in Urban Cities

Loan by Persons who Survey
Filling the Gap of the History of Welfare Loan System: Practices and Envision Immediately after the War
Postwar Welfare Loan and Social Workers
Reduction of "Takeoff" Path of "Regular Vocation"
Summary

◆Chapter 4 (MATSUDA Yukiko)
Transfiguration of "the Town of Women": Apprenticeship of Kyoto Hanamachi after the War

Part 2
Regime of Security: Age of Criticism against the Regime and its Trend

"Criticism"/"Revolution" and "Anti"/"De"
Medicalization under Social Defense
Expansion of Mental Health: Revolution of the Academic Society （1969）
Regime of Psych and Mind

Part 3
Surrounding Regime/Regime of the Surrounding: Minorities in the Midst of Regime Transformation

Regime of Becoming Others: Early 20th Century
Asians in a White Country
New Figure of "Immigrants/Public" and Transformation of Regime
Between "nisei" and "nikkei"
Summary

◆Chapter 11 (TOMITA Takahiro)
Two Modernization in the Livestock Society in Mongolia: Shift of Development Policy and Livestock Management near the City