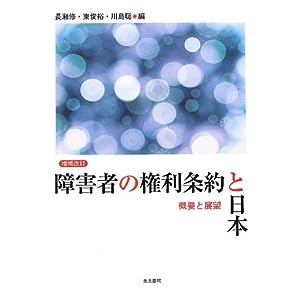 With this measure, Japan is expected to ratify the CRPD. In such a time, the second edition of this book is published to contribute to theory and practice of the implementation of the CRPD before and beyond the ratification.

In this edition, the authors modified existing chapters to reflect the development concerning the convention both domestically and internationally. Moreover, this book includes new chapters, FUJII's paper on the policy reform for harmonization with the CRPD, YAMAZAKI's paper on measures for implementation of the convention, and HIKUMA's paper on the EU and the CRPD. In addition, this book includes the original translation by the government (2007), translation by KAWASHIMA and NAGASE, and the updated translation by the government in March 2009.