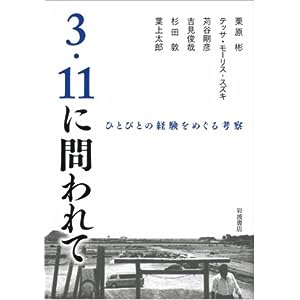 At 2:46 p.m. on March 11, 2011, the massive earthquake, which centered in Sanriku, hit eastern Japan. This earthquake severely shook, destroyed and swept away individuals' daily bases there. Association among people was instantly destroyed and many were forced to leave their home land. Our society's conflictions were revealed at once by the concurrent occurrence of the earthquake, massive tsunami and nuclear accidents, together with the post-disaster confusion. The explosions of nuclear reactors exposed serious problems in various fields ranging from science, technology, economy, regional relationship, politics and consumer life, as if it opened a Pandora's box.

This book discusses what each individual has experienced during these catastrophic events and moreover, what we have learn from these experiences.

The date of August 15, 1945 […] has a significance of "experience" that have influenced our spirits. The date of March 11, 2011 must also have a similar impact. Since March 11, the world has not been viewed in a same way compared with the past. Moreover, even the pre-disaster world has been perceived differently.
(Cited from "Forward")

What do the experiences of March 11 mean to us? How should we consider the pluralism of the experience for people? What are necessary things to maintain our memories of various experiences? Ongoing problems are examined intellectually in terms of historical viewpoints and problem consciousness both inside and outside of Japan. This book attempts to provide suggestions for future thoughts and actions through round-table meetings and discussions of first-line researchers and journalist's reportages.

Our society's conflictions were revealed at once by the concurrent occurrence of the earthquake, massive tsunami and nuclear accidents, together with the post-disaster confusion. These events exposed serious problems in various fields ranging from science, technology, economy, regional relationship, politics and consumer life. What have individuals experienced during these catastrophic events? Moreover, what do we have to learn from March 11? This book attempts to seek future thoughts and actions, by examining this question based on historical viewpoints such as modern or postwar Japanese society and problem consciousness both inside and outside of Japan.

After the Tsunami Disaster: Paths to Local, Regional and Global Reconstructions
MORRIS-SUZUKI Tessa

Reportage: March 11 for People
From the Scene of Evacuation from Nuclear Power: Ohkuma-cho, Fukushima Prefecture, Can We Go Home? We Can Not Go Home, We Will Not Go Home
HAGAMI Taro

Two Lucky Dragons that We Encounter in Fukushima: Rebirth of Art under Radioactivity
KURIHARA Akira

Putting up an US Umbrella in Radioactive Rain: Reflection on "Long Post-war Period" and Nuclear Power
YOSHIMI Shunya