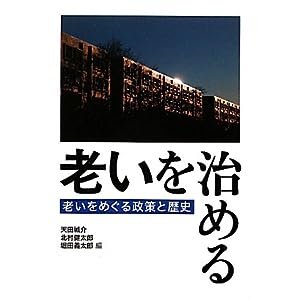 Policies and history of aging in postwar Japanese society have been formed by historical dynamism in which the elderly have become "majority in minority" or "mainstream in minor" in accordance with the unprecedented "aging" society. To put it briefly, aging of the "middle-class" itself, which has become a mainstream in the postwar period, has formed the shape of policies and history of aging in Japan. It enables Japan to govern aging. This book describes the topic exclusively.

Chapter 3 Policies and History of Aging  AMADA Josuke
1 Attempts of Analysis of Systems: Plan, Effects, Usage and Strategic Allocation of Systems
2 History and Sketch of Social Policies in Modern Japan
3 Emergence and Restructuring of Medical Care Policies for the Elderly in the Postwar Period
4 Organization and Modification of Welfare System, Pension System and Tax System for the Elderly in the
Postwar Period
5 Complexity Resulted from the Fact that Economics Make Matters Real Makes the Reality Troublesome

Chapter 4 Economics of Medical Nation in Postwar Japanese Society  AMADA Josuke
1 "Human Rights for the Government": Questioning Human Rights and Presenting Different Ones
2 Inappropriateness of Terms of "Medical / Anti-Medical"
3 Economics of Open Medical Nation?
4 Healthcare and Welfare System for the Elderly in Prewar / Postwar Japan
5 What has Healthcare and Welfare System for the Elderly Brought to Reality?
6 The Position of Aging in Postwar Japanese Society
7 Proposing "Human Rights" Based on Historical Diagnosis

Part II Policies and History of Aging
Chapter 5 Examination of "QOL" in Japanese Rehabilitation: Pursuing Scaffold of Rehabilitation Beyond
Subjective / Objective Views  TAJIMA Akiko
1 Introduction: What Makes "QOL" a Problem?
2 Subjects and Methods
3 Results: Characteristics and Shift of Discourse / Research on "QOL" That Are Overviewed by Being
Divided them into 3 Periods
4 Discussion: Necessity of Concept of Normative Support that Supports Gap between Subjective /
Objective Views and their Existence

Chapter 6 Movement and Fruits of Those Who Are Living with Artificial Kidney: Creating New Systems for
Living  ARIYOSHI Reiko
1 In Oder to Keep Confronting
2 Problems concerning Introduction and Cost Burden of the Advancing Technology of Artificial Kidney
3 Problems due to Scarcity of Artificial Kidney
4 Inauguration of Patients' Association: Sharing Individuals' Problems
5 Developing Patients' Association into a Nationwide Organization
6 Negotiations with the Welfare Ministry and the Course to Obtaining Public Funds
7 Act on Welfare of Physically Disabled Persons: Medical Rehabilitation Service and People with Internal
Disorders
8 Approach to Municipality: In Order for All People to Use Systems
9 Those who Always Confront Systems Severely

Chapter 7 Patients' Movements and Development of Systems of Patients with Hemophilia in 1970s:
Obtaining Pubic Funds and the Course to Official Approval of Self-injection
KITAMURA Kentaro
1 Defining the Problems
2 The Establishment of the "Japan Hemophilia Fraternal Association"
3 Start of Municipal Share of the Cost against Medical Treatment of Hemophilia and Barrier of its Age
Restriction
4 Formation of Research into Treatment for Specific Child Chronic Diseases
5 Expectation toward "Home Infusion" and Official Approval
6 Patients with Hemophilia in 1970s in Japan

Part III To Govern Aging
Chapter 10  Governance of "Fragile Lives": Difficulties in "Application" of Theory of Governance to Elderly
Care  AMADA Josuke
1 Conflicts between Lives and Powers of those who Are Disgraced
2 Resistance against Fragile Lives that Are Closing to Death
3 Attempts of Theory of Governance
4 What Do we Govern?
5 Bio-politics that Makes it Possible to Make Natural Adjustments in "Naturalness of Society"
6 Governance for Maintenance and Enhancement of National Power?
7 History and Sketch of the Process toward Welfare State in Modern Japan
8 Emergence of "Socialization of Medical / Care Services for the Elderly" in the Postwar Period
9 Can't we Understand it Only with Theory of Governance?
10 Fragile Lives / Bodies as a Capital
11 Difficulties in Positioning Resistance against Fragile Lives that Are Closing to Death

Chapter 12 Turning "Generation" into a System of Thought: Receiving "Conflicts between Generations" and
Questioning them  AMADA Josuke
1 Narrative on "Conflicts between Generations" Is Certainly Making an Appeal to our Emotion
2 Questioning "Generation" at its Foundation
3 Turning "Generation" into a System of Thought in this Society
4 Generating Freedom: Freedom under "Safety" Also Generates "Anxiety"
5 Invisible Integrity that Is Unmanageable Bases Individual Selfish Calculation
6 Concept of "Society" itself Makes Liberalistic Governance Practice Possible
7 Bio-politics Is Allocated by Economy
8 Racism Grafts Making Alive and Disposing into Death
9 Primordial Gifts Beyond Economy
10 Miracle Arrival of the World in the Future

Chapter 13 Considering Society where Date and Place Are Impressed: Several Issues that Academics
Should Deal with  AMADA Josuke
1 Re-questioning in Social Gerontology
2 Analyzing the Ways of Questioning in Social Gerontology
3 What Have not Been Questioned Even in Recursive Aging Era
4 Toward Clarification of Politics of Identity over Aging
5 Clarifying Economy and Politics in Terms of Family over Aging
6 Clarifying Economy and Politics over Aging
7 Considering the Date and Place where our Society Stands

Chapter 14  Those who Touch the Bottom Lose Voices and Provides Voices: Cruel Knots over "Aging and
Frailty"  AMADA Josuke
1 Framework of Sociology over the "Involved Persons"
2 Bearing up what Are Difficult to Bear up and Enduring what Are Difficult to Endure in "Extreme
Situations"
3 Managing to Bear up by Oneself in "Extreme Situations"
4 Activities for Self-protection by those who Live with Dementia
5 Writing at Distance between the "Involved Persons" and "Passive Observers"