Sociology of "Social Support": Thoughts that Face the Fields 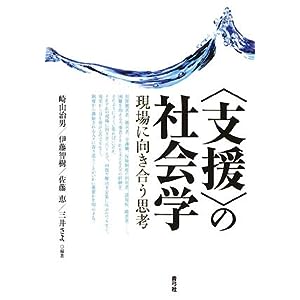 (From “BOOK” Data Base)
How can we perceive experiences of those who have been suffering from difficulties and their supporters, such as crime victims, disaster ones, care staff, users of the insurance system, people with dementia or disabilities? This book clearly presents the importance of cuddling up to those who have been eliminated from the social systems by facing the reality in each field without requesting recovery or solution easily or escaping from the reality.

Introductory Chapter Toward Sociology of "Social Support" SAKIYAMA Haruo
Part I Narrating and Listening
Chapter 1 "Becoming" a Narrator: Self Narrative on Convergence of Diseases ITO Tomoki
1 Difficulties in Existing of the "Restitution Narrative"
2 Ambivalence
3 The "Restitution Narrative" as Internal Others
Chapter 2 "Listening" as a Start Point: A Recovery Form in Self Help Groups of Crime Victims SATO Kei
1 Absence of Others who "Listen"
2 Others who "Listen" equals Becoming a Peer
3 "Listening" and Reflection
Chapter 3 For Sociological Access to 'Bereavement': Through Critical Examination on "Stage Theory" SUITSU Yoshikatsu
1 Questioning the Meaning of "Bereavement"
2 "Bereavement" and "Stage Theory (Theory of Grieving Process)"
3 What Are the Problems of "Stage Theory"?
4 Re-acknowledgement of "Bereavement" as a Fundamental "Loss"
Part II Access to Support Practice
Chapter 4 Support as "Human Beings": Supporting 'Isolated' Lives in the Great Hanshin-Awaji Earthquake MITSUI Sayo
1 Facing "Solitary Death": "Unless One Is Accepted, One Is Never Present"
2 Involvement as Human Beings: "Becoming Listeners"
3 Support Activities Starting from "Listening"
4 "Living Thoroughly to the End of Life": Supports that have Accumulated Each Moment
Chapter 5 Support for Users without Connections: Possibilities of the Narrative Approach in Social Work ARAI Hiromichi
1 Users without Connections
2 Range Capability of Care Management
3 Social Work Practice Using the Narrative Approach
Chapter 6 Survival Techniques against Emotions of "Bereavement": Through Narratives of Care Staff who Have Faced Bereavements MITSUHASHI Koji
1 Confirmation of Concept and Background Knowledge
2 "Don't Cry"
3 "I Chose You"
Part III Reexamination of "Sociology of Social Support"
Chapter 7 Possibilities of Psychologisation and Social Criticism: Society which Desires Emotion / Emotion which Desires Society SAKIYAMA Haruo
1 Development of Psychologism and its Support: Psychologisation of Sociology
2 Self who Is Affected by Psychologism: The Theory which Desires Emotion
3 Difficulties of Criticism against Psychologism: Between Nature and Artifact
Chapter 8 How to Face the Medical Theories: Reexamination of Criticism against Medical Care in Practices of Dementia Care IGUCHI Takashi
1 Background of Pioneering Practices
2 What Aspects of Medical Care Have Been Criticized?: Criticism against Medical Care Based on Psychiatry Clinical Practices
3 Criticism against Medical Care through Practices of Creating Places to Stay
4 Lessons through Criticism against Medical Care: Between Relationship and Therapy
Chapter 9 Possibility/Impossibility of a Sense of Involvement: Why Disability Studies Exists HOSHIKA Ryoji
1 Background of the Establishment of Disability Studies
2 Implication of a Sense of Involvement
3 Impairment and Disability as a Common Experience
4 Immanent Academic Value of a Sense of Involvement
5 Value of a Sense of Involvement as a Tool
Afterword SATO Kei