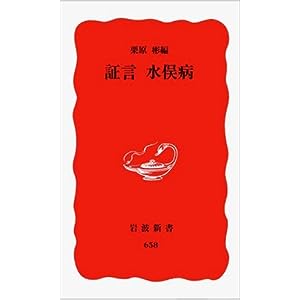 □Introduction of its Contents from Publisher/Author
Now, it is worried that the accident of Minamata Disease might be forgotten. Can we really "forget" Minamata Disease? Tremendous death of families, discrimination and prejudice around them, a long fight with Chisso Corporation and the government and choice of acceptance of the proposed settlement... This book is the collection of testimonies of 10 patients to understand how they have lived and for what they have appealed with diseases. How should we respond to the question?

□Contents（From "BOOK" Database）
Tremendous death of familiar people, bitter discrimination and prejudice, a long fight with Chisso Corporation and the government and choice of acceptance of the proposed settlement... How have they lived and for what have appealed for with diseases? This book is the collection of testimonies of 10 patients' own experiences and feelings to question the sensitivity of the age.

■Citation from the Book

Withdrawing a petition for patient status
Meanwhile, I myself withdrew the petition for patient status I had been seeking. One of the reasons, I think, was that I had been following the whereabouts of the essential responsibility of the Minamata disease incident. Surely, in the incident it is true that the Chisso Corporation is the offending enterprise and the Japanese government and Kumamoto Prefecture have maintained the corporation's position and promoted the policy for prioritizing the industry. In that sense, it is structurally true that each of the three is the offender. However, I kept questioning whether the responsibility of the three, which I had thought there had been, was essential. I could not help wondering if there was a very big problem of human responsibility behind its structual responsibility.
On the other hand, I wondered what the Minamata disease incident told us. The reason, I thought, was that what had been questioned for a long time was the offenders and it was natural. I have never thought that "I" was questioned. However, during the struggle at such places as the Kumamoto Prefecture, the Environmental Agency and the court, since an opponent that received what I threw out was always different, I was not able to see its element. And since there was no opponent that 'really' received what I threw out, it returned to me in the end. As a result of this, the question made me crazy. I think I was questioned, "How about you?" Once in the era when the Chisso Corporation kept poisoning and earned a lot of money if I had been its employee or executive, I had not been certain that I would not have done the same thing. This was what I was forced to ask myself.
And I began to wonder what the Chisso Corporation was and what my opponent was. After struggling for a while, I finally found the huge 'system society'. What I meant by the "system society" was the law and system. Moreover, values of the era was structurally built in it. I thought that the society was very fearful. Since I felt I was about to be invloved in the system soon, I withdrew my petition for patient status and since then I had alerted other patients in my own way.